With over 120 prints in our museum, the most famous works from the oeuvre of M.C. Escher (1898-1972) are permanently on display at Escher in The Palace. These magnificent prints are being exhibited in a regal setting: the former winter palace of Queen Mother Emma.

Discover the artist Maurits Cornelis Escher, a man who never lost his fascination with the wonderful world around him. The Netherlands’ most famous printmaker enthrals people young and old with his imaginative worlds in which illusion and amazement are put centre stage.

Escher’s development as an artist is a key focus in the museum. His early work consists of detailed woodcuts of people and unrivalled depictions of nature and landscapes, in which he explores his talent. In his later work he develops his revolutionary tessellations, metamorphoses and optical illusions. His playful prints delight the eye and have been a rich source of inspiration for mathematicians, film-makers and architects throughout the world for many years.


Learn about Escher’s life and work in our film room, discover how he went about creating his extraordinary graphic work and delve deep into his history through photos and an interactive timeline.


The master, the king, the magician

Admire Escher’s masterpieces which are the crowning glory of his impressive oeuvre. Consider in this regard an early highlight like Day and Night (1938), in which he transforms a rural Dutch landscape into flying birds. Or the timeless print Relativity (1953), in which he defies gravity and multiple realities seem to coexist. And, of course, the jewel in the crown: the seven-metre-long Metamorphosis III (1967-1968), which represents the ultimate interpretation of his key themes: eternity and infinity. Discover Escher as a master of the metamorphosis, the king of illusion and a magician on paper.

Experience the world of Escher 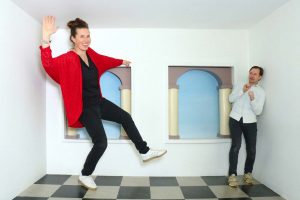 On the second floor you will learn to see like Escher did, in the interactive exhibition ‘Through Escher’s Eyes’. Puzzle with your eyes, discover with your hands and become part of Escher’s perception. Immerse yourself in his illusion and become giant or tiny in just a few seconds. Get even closer to Escher by making your own tessellation or playing with impossible figures.

Our Op-art room tests the bounds of credibility: the artworks seem to be moving… and yet it is your own movement that is creating this illusion. In the remarkable installation Langenfelder Lichtwand for Escher in The Palace by German Zero-group artist Otto Piene, you will become part of a spectacle caused by the continuously moving light. An unforgettable experience.

Queen Mother Emma (1858-1934) lived and worked in this former palace from 1901 until she passed away. She also received her official guests and family here. After her death the palace was used by Queens Wilhelmina, Juliana and Beatrix. Over two centuries old, the palace is situated in historic The Hague’s museum quarter on Lange Voorhout, one of the most beautiful avenues in the Netherlands. It is the only public building in The Hague where you can still experience the royal palace atmosphere.

Furthermore, the palace features a unique parquet floor by the American minimal artist Donald Judd and is lit by the spectacular chandeliers by Hans van Bentem.

More about Escher in The Palace

A selection from the exhibitions that have been on view at Escher in The Palace since its opening in 2002.
Read more

An overview of our admission tickets and accepted discount passes.
Read more